Landslide Victory for Choir and Band

No swings to the left or right here!  lnstead we sat swinging in time to music performed  by the reputable forces of award-winning Colne Valley Male Voice Choir and the Brighouse and Rastrick Brass Band, proud winners of six ‘first’ prizes at this year’s Whit Friday Band contests.

Local maestro Thom Meredith led all through a cheerfully cheeky rendition of Funiculi Funicular (Denza), which exposed excellent choral discipline as the choir easily grappled with fast conversational passages. The powerful band enhanced this song with their delicate playing.

This impressed me. Too often a brass band does not know how to turn the volume down.  We repeatedly heard the choir’s trademark choral blend of excellence, spot-on diction and assured ensemble singing.

In a programme of mainly expressive songs, that didn’t rely on pacey rhythmic momentum, the singers kept a sure eye on their conductor to shape the phrases and follow any slight tempo changes.

(And we kept an eye on Thom as he brought the house down with his wonderfully expressive solos in You Raise Me Up by Lovland).

Examples of well-controlled and sensitive singing were heard in the bass melodies of When I Fall in Love (Young and Heyman) and in the choir’s contemplative interpretation of Shenandoah (traditional) with its alluring and unexpected harmonies.

This choir’s affinity with church music was demonstrated in stirring performances of Benedictus (Arvryn), with some robust unison singing, and in Morte Christe (When I survey The Wondrous Cross) enlightened by Matthew Houston’s beautiful tenor solo.

This choir was born to sing these pieces. The band produced their own uplifting performances as in Ballade (Gollande),conducted by Dr David Thornton. Here, solo tenor-horn player Sheona White made her instrument truly sing. Breath-taking.

This was matched in its electrifying energy and raw power by Baker’s A Short Ride in a Brass Machine and Strike up the Band (Gershwin) in which the percussion section sprang to life.

This is England’s top brass band and proved its standing in pieces such as the march – Knight Templar.

Water-tight ensemble, crisp articulation, and outstanding musicianship resulted in a tremendous sound that simply blew us away.

The inspirational finale, We Rise Again (Dubinski), with super soloist James Cooke, left me in no doubt of my allegiance to this musical coalition. They all have my vote.

And with a standing ovation, following an impromptu Floral Dance, they got the vote of the overall majority. This concert was a landslide victory for all performers. 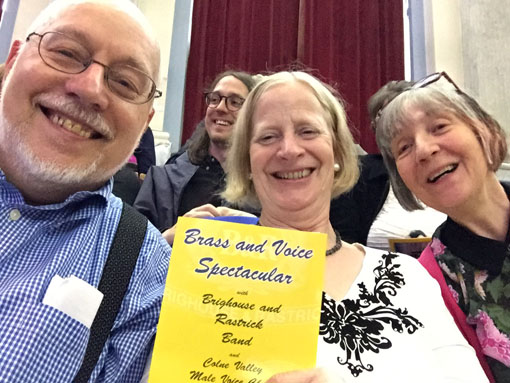